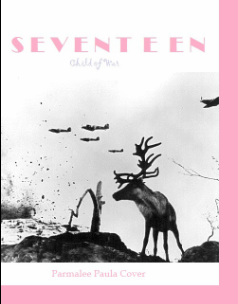 Performance art, phone sex, and homeless crazies merge surrealistic lives fraught with danger in '80s Los Angeles through the story of Anagogie, a saboteur for a Montana miners union, who dies and then moves to “Hollywood” to save her grand daughter, a phone sex operator being stalked by Anagogie’s lover, Death Fella.

2., 3.  SEVENTEEN/ CHILD of WAR, 978-0-9854757-1-0 hard cover, paperback  Teenagers live on two continents, tten years apart share similar emotional turmoil due to war, politics, and cruelty and betrayal by friends and family. On the European continent, Vilho a Christian Jew at the onset of Germany’s invasion of Poland, whose mother is betrayed and shot by the SS during a clandestine broadcast from headquarters in the sewer, makes his harrowing  exodus to Lapland where he is drafted by the Nazi Wehrmacht as a cartographer during Finland’s continuation war with USSR (Co-Belligerent) After providing the Germans with bogus maps, he and two Jewish buddies escape by circumnavigating the Arctic Pole and through the Gulags of Siberia.  Although wounded Vilho, with the aid of his friends, continues to follow the path of his true love, Helen, who he last saw on a train transport from the Warsaw Ghetto .

The American protagonist is star struck Lola, a rebellious Montana high school student, who a decade later in the early 1950s is cruelly maligned by her communist parents who met in Berlin during the wild and decadent Cafe scene during the Wiemar Republic. and malicious  brother for being bourgeois.(Maria and her mother here) Known in the community of Seventeen Valley, as “The Geologist” Vilho becomes Lola’s mentor once he discovers that Lola’s sister, Helen supposed Hollywood star may he his long lost amour. After revelations that her father and brother have tuned the orphanage into a brothel and burned it down as a coverup, and rebuffed by her sister, Lola leaves Montana to become a Copacabana dancer in New York City but is waylayed in this ambition when she is held in a subway tunnel commune under the spell of the charismatic Tunnelman whose watch on his proselytes is tracked by followers in several cities including Seventeen where his cell leader is Lola’s father. At the same time Vilho, abandoned by Lola, uses Lola’s letters from her Helen to locate Helen in San Francisco during the McCarthy hearings where her sugar daddy, a well known Hollywood director is being interrogated by the McCarty Committee.